After its first showing on BBC 1992, this programme was banned from television broadcast for 10 years, because of the scare that it created. Incredible mockumentary, a lot of its first viewers believed it to be true.

We are very excited to announce that the writer of the programme, Stephen Volk, will be present to introduce and discuss the it with the audience!

+ Organ playing before the screening

+ JAZZFINGER will be DJing some fabulous obscure electronic music in the bar after the screening!

This infamous BBC mockumentary about an evil spirit possessing a suburban household was taken by some audiences as a genuine live broadcast upon its first (and only) broadcast on Halloween in 1992. A prophetic satire on reality television, it is also a multilayered ghost story that repays repeated viewing. Shown on Halloween 1992 just after the 9pm watershed, Ghostwatch created something of a stir for purporting to be a live broadcast investigating nationwide claims of paranormal phenomena. The programme was, in fact, an elaborately staged drama, written by horror specialist Stephen Volk and pre-recorded months earlier.

Due to the furore that followed its first and only UK television broadcast, the show is now widely regarded as being one of the most controversial British television events of all time.

Ghostwatch received a huge audience and an estimated 30,000 calls to the BBC switchboard in a single hour.

At least 35 complaints were lodged against the BBC of this programme, including in one case of suicide.

The Broadcasting Standards Commission ruled that "The BBC had a duty to do more than simply hint at the deception it was practising on the audience."

Later, the producers of the programme issued an apology.

Simons and Silveira published a report in the British Medical Journal in February 1994, describing two cases of Ghostwatch-induced post-traumatic stress disorder in children, both ten-year-old boys.

The reaction to the programme led the BBC to place a decade-long ban on the programme being repeated after its initial broadcast.

THE PLOT: A GHOST IN THE PIPES

The programme involved BBC reporters performing a live, on-air investigation of a house in Northolt, Greater London at which poltergeist activity was believed to be taking place.

Through revealing footage and interviews with neighbours and the family living there, they discovered the existence of a malevolent ghost nicknamed Pipes from his habit of knocking on the house's plumbing.

As the programme went on, viewers learn that Pipes is the spirit of a psychologically disturbed man called Raymond Tunstall, himself believed to have been troubled by the spirit of Mother Seddons – a 'baby farmer' turned child killer from the 19th century.

These manifestations became more bold and terrifying, until, at the end, the frightened reporters realise that the programme itself was acting as a sort of "national séance" through which Pipes was gaining horrific power.

Finally, the spirit unleashed its immense power, killing Sarah Greene and escaping, beginning to escalate its poltergeist activity throughout the country, having taken control of the BBC studios and transmitter network, using the Ghostwatch studio as a focal point, possessing Michael Parkinson in the process.

WHAT STEPHEN VOLK SAYS ABOUT THE PUBLIC'S REACTION

"What astonished me was the public’s reaction.

It went in totally opposing directions, from people who saw through it in seconds and thought it was awful and stupid, to people who believed in it completely all the way through. In fairness, I was after the middle ground: people who would watch it, get intrigued, sucked in, ‘get it’ then enjoy it nevertheless.

It was weird to be accosted by a lady in a shop the next day who said, "Ere! My young lad was awake all last night because of you! We had to take down his luminous skeleton off the back of his bedroom door!" (To which one might say: what was the skeleton doing on his door in the first place?)

I was also amazed that a friend of mine, whom I had told to watch out for this programme "wot I wrote", phoned me to say she had believed it totally. I said, "But I told you I wrote it." She said, "I know, but as soon as I saw Michael Parkinson I thought you must have got it wrong!"

We have sold all our available advance tickets online, but do not dispair!! We will release 10 to 20 tickets on the night - so if you want a ticket, come early (about 7pm/7.30pm), and you should be able to get a ticket. First come first served, so don't come too late!

Concessions offered to unwaged/unemployed/retired, holders of a Discover Pass, and members of Equity/MU/Writers Guild.

A celebration of the freaky, spooky and obscure side of UK television drama. Programmed by James Leggott (Lecturer in Film and TV, Northumbria University) from the darker corners of the BBC archives, with special guest introductions, this is a rare chance to catch some of the most haunting telefantasy ever transmitted.

This futuristic story concerns a group of scientists who discover that their newfangled recording device is picking up disturbing transmissions from the past... 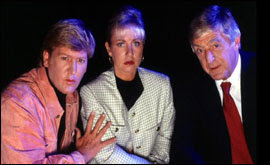 This infamous BBC mockumentary about an evil spirit possessing a suburban household was taken by some audiences as a genuine live broadcast upon its first (and only) broadcast on Halloween in 1992.

A true cult classic about a teenage boy’s fantastical encounters with angels and pagan rulers, Penda’s Fen is an enigmatic meditation on themes of nationality, sexuality, myth, masculinity and religion. The “Alien Nation” season of weird and haunting UK telefantasy concludes with this double-bill of two gems highly rated by connoisseurs of 1970s TV horror.

This event is being programmed with the support of Northumbria University, as part of the International Conference “Alien Nation: A Conference on British Science Fiction, Horror and Fantasy Television” (20-21 July 2011)