Part of the very exciting new wave from Uruguay, winner of the best first feature film and the Silver Bear awards at the very prestigious Berlin Film Festival, this is a great little comedy about an unlikely subject - a security guard in a supermarket.

The film has won prizes at festivals all over the world, but it has never been released in the UK, and this is a Newcastle premiere.

Jara is a shy and lonely security guard at a supermarket on the outskirts of Montevideo. He is in charge of monitoring the surveillance cameras of the entire building. Since he works the night shift, there's not much to do, and the place looks pretty quiet.

Everything seems to be going as usual until Jara accidentally discovers Julia, a cleaning woman through one of the cameras, and becomes gradually attracted to her... One of the smallest countries in Latin America, Uruguay has, in the last 10 years, produced a large number of films, after about 100 years of producing hardly any! This is partly due to financial support, which is more easily available.

A lot of films from Uruguay have been produced by one single production company, called Control Z productions, created by a group of friends.

They have produced some great films, some of them have gone on to win international prizes all over the world (Whisky (2004, Dir. JP Rebella and Pablo Stoll), and Gigante especially), and also lots of other films, that have sometimes been distributed internationally (25 Watts (2001, Dir. JP Rebella and Pablo Stoll)), and others not (Hiroshima (2009, Dir. Pablo Stoll)). We totally love Hiroshima though, and showed it in November 2010.

So, only in the last 10 years have films from Uruguay been seen by other people around the world, and that's quite exciting. Also, it's really interesting that such a small country has produced so many interesting films recently.

The Star and Shadow Cinema has developped a bit of a link with that distribution company, and with films from Uruguay, as we showed quite a few Uruguayan films in Noverber 2010: apart from Hiroshima, we showed Whisky (2004, Dir. JP Rebella and Pablo Stoll), and The Dog Pound (2006, Dir. Manuel Nieto Zas).

So we're really happy to keep that link going, and to programme Gigante tonight.

Other programmers have picked up on their resurgence of films from Uruguay, and the BAM Cinematek in New York programmed a Uruguayan film season recently, including Gigante, as you can see here:

"More good news from Latin America: one of these small, intelligent, fragile and very humanist films, from which you come out touched, seduced, happy" - LE MONDE (French newspaper)

"In his feature debut, Biniez could easily be setting in motion a familiar, suspenseful stalker thriller, but thankfully he is much more concerned with exploring the workings of the human heart with a touch of wistfulness and a dash of humor." - LOS ANGELES TIMES

"Going to the movies is, at some level, pure voyeurism -- if they involve people, that is. Transformers don't count. I admire films that consist only or in large part of watching." - ROGER EBERT - CHICAGO SUN-TIMES

Impressive number of very prestigious prizes and selections, some of which are:

WHAT THE DIRECTOR SAYS

"This film is not about the beginning of a relationship, but about what precedes it. It is about the process that any human being in love has to face before taking action, at a stage where he has to deal with his feelings and his deepest fears. A stage where what he knows about her is little more than an image: a big question mark he wishes to decipher."

"What interests me the most about Gigante is that it walks the boundary between falling in love and obsession. There, where falling in love has its share of alienation that turns the one in love into an obsessive and absent-minded human being."

"Jara’s life goes by monotonously until, on one of the very same surveillance monitors he watches every day, he is captured by an image that perfectly fits a desire he was not even aware of. At first, since Jara is a heavily-built and threatening looking guy whose job has to do with surveillance, the audience might see him as a potential danger to the cleaning woman- especially considering the way in which he tries to approach her.

However, this idea starts progressively fading while the audience realizes that Jara has simply fallen in love with Julia, and does not represent any danger to her. Actually, he is the scared one. Jara soon starts to change and to feel overwhelmed by this feeling: he starts behaving like a voyeur and a stalker, something completely unexpected to him." 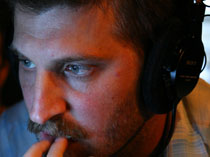 A few facts about Adrián Biniez, the director.

- In the nineties, he was a singer and composer for the Argentinean indie pop band Reverb. He recorded two albums with the band and was frequently on tour.

- In 2003, he played a small role as a karaoke musician in the Uruguayan film Whisky (Dir. Pablo Stoll)