Naked Gun: From the Files of Police Squad + SPECIAL PARTY UNTIL 2AM!

One of the funniest comedies ever made! ZAZ-team's (Zucker-Abrahams-Abrahams) fast-paced slapstick comedy is full of visual and verbal puns and gags masterfully delivered by the late Leslie Nielsen as the Lieutenant Frank Drebin from Police Squad!

Jim Abrahams and the Zucker Brothers in triumphant form, bringing the cast of Police Squad to the silver screen.

Lt Frank Drebin (Leslie Nielsen) is a cop with a high arrest rate, but a low IQ. Investigating the attempted murder of a fellow detective (OJ Simpson!) he uncovers a plot to make baseball legend Reggie Jackson assassinate the Queen of England. 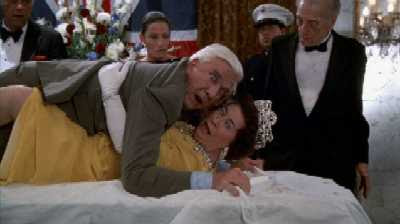 Nielsen, in probably his most memorable role, is aided and abetted by a stellar cast, including Ricardo Montalban, George Kennedy and Priscilla Presley. A bigger budget means bigger gags, but the spoofing of classic movies is still at the heart of the film. Everything from ‘Regle Du Jeu’ to ‘The Maltese Falcon’ is amiably riffed, and it’s truly an experience to see Nielsen at the top of his game.

+ VERY SPECIAL PARTY until 2am!

At the Star and Shadow Cinema, we pride ourselves in being very fit, and we would like everyone esle to be as fit as us - although we do realise it's virtually impossible!!

HOWEVER, TONIGHT IS YOUR OPPORTUNITY!! We will be giving a special aerobics class - it will be free, and anyone can join!! Special session after the film!!

THIS IS YOUR LUCKY DAY!! Goodbye cellulite!!

We are greatly inspired by the moves and philosophy of Jane Fonda and other 80s queens, so you will learn a great deal about that tonight.

After that, w'll have a fabulous set from the best Star and Shadow DJs, for the most fun 80s music!

Come to have an AEROBICS class like no other, as demonstrated in our very own advertising: