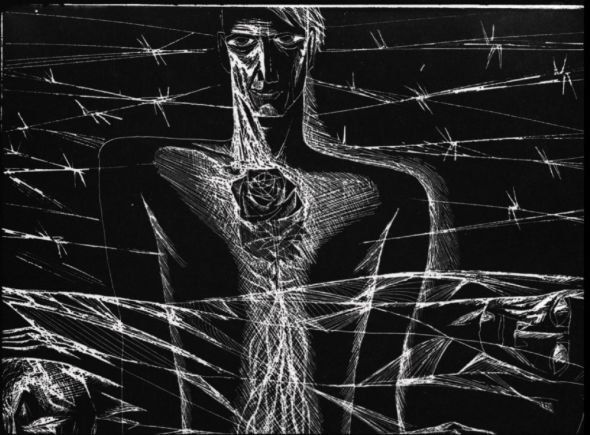 + Q&A with program co-curator Lina Kaminskaitė - Jančorienė, a cinema historian and a co-founder of Meno Avilys - Mediatheque, the first cinematheque in Lithuania

On Friday 8th and Saturday 9th of March, 2019, Lina Kaminskaitė - Jančorienė, cinema historian, researcher, and co-founder of Meno Avilys-Mediatheque (the first independent cinematheque in Lithuania) will present a number of newly digitised and restored Lithuanian documentary and experimental films.

On Sunday 10th of March, there will be a screening of Douglas Gordon’s 2016 film ‘I Had Nowhere To Go’; a sound-based portrait of Jonas Mekas, Lithuanian-born American filmmaker who was often called ‘the godfather of American avant-garde cinema’.

All screenings will be followed by a Q&A session with Lina Kaminskaitė - Jančorienė.

Systematic control and censorship within the Soviet Union meant that the importance in storytelling was placed on visual language and poetic filmmaking. Critically documenting the reality of marginalised characters and recording peripheral landscapes was avoided, as it could have potentially criticised the Soviet establishment.

‘Reflections’ is a film by Henrikas Šablevičius that was made for Lithuanian Television. It is a surrealist étude that doesn't have a clear narrative and is courageous in the context of Lithuanian cinema at the time. The film was banned and put on the shelf for almost twenty years. Henrikas Šablevičius used the work of forgotten graphic artist Stasys Krasauskas. In the conditional spaces of the film, he creates a story about the dual character of a man, the search for himself, his liberation and his life with the past.

The focus of Grikevičius’s film is Tomas Petreikis, a senior machine constructor of Dzeržinkis’s factory in Kaunas. Instead of creating a conjunctural narrative about a hero of Socialist work ethic who exceeds the norms of production, the director depicts another part of his personality. During his leisure time, Tomas is a ballroom dancer, teacher and a judge in competitions. “Construction and dance? No, they have nothing in common”, Petreikis replies to a journalist’s question. However, the movie is rich in parallels which reveal the precision of both the constructor and dancer; his pursuit not only to control the machines perfectly but also to be a master in teaching ballroom dance, proposes quite a different view than is claimed by himself.

As film director Audrius Stonys puts it himself, “the film came into reality while trying to answer a question: how can one film the invisible?”. The film subtly weaves together moments of interaction between people, animals and their surroundings. Long shots, absence of words, and meditative images interplay with music, opening up to the viewer a haptic and philosophical realm which is beyond the visible. In 1992 the film received the FELIX Award for the Best European Documentary Film.

In this experimental documentary, film director Algimantas Maceina reveals the theme of the exile of Lithuanian society from a very personal perspective. He films the repatriation of the remains of his grandfather from Siberia to Lithuania. This personal approach to societal tragedy – the genocide caused by the Soviet regime – links personal to collective memory and erases the boundaries between personal film archives and publicly acknowledged films.

After the re-establishment of the State of Lithuania (1990) and the fall of the Iron Curtain, freedom of expression was finally allowed, and a new generation of filmmakers started developing their work under the influences of Jonas Mekas – a Lithuanian-American filmmaker, poet, and artist who has often been called ‘the godfather of American avant-garde cinema’.

- To show Lithuanian documentary filmmaking traditions and its continuation;

- To present different examples of experimentation, such as various techniques of montage or genre deconstructions, showing the limits that filmmakers were facing;

Canonical 1970s films were made by V. Starošas and R. Verba, which formed and shaped traditional poetic documentary filmmaking and whose influences were later visible in H. Šablevičius and D. and K. Matuzevičiai’s work, but this time in Lithuania which had just regained its independence. The films will reveal the various cinematic experimentations used by H. Šablevičius, A. Grikevičius, A. Stonys and A. Maceina.

The programme consists of filmmakers who are from multiple generations and whose films were made under different circumstances and restrictions: Stalinist social realism, The Khrushchev Thaw, Collapse of the USSR and Post–Soviet Lithuania. Each film is like an inclusion of time, capturing a sense of creator and personal struggles faced as a filmmaker.