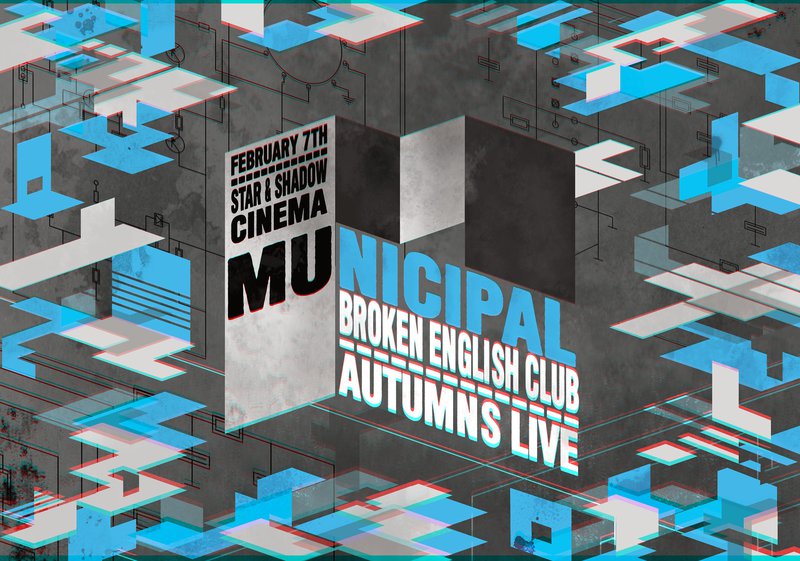 Municipal returns. This time we’re exploring the outer reaches of techno. Where the techno framework intersects with other genres and ideas. In this case; EBM, Industrial, and post-punk.

OLIVER HO is a legitimate techno icon. During the late nineties and early 2000s he released countless records on some of the eras most celebrated labels, including Surface, Blueprint, and his own label, Meta. The later 2000s saw Oliver focus on the RAUDIVE project, exploring the overlaps between genres, and demonstrating more overtly his varied influences. Then in 2014 the BROKEN ENGLISH CLUB project was born. An EP on Jealous God came first, and was then quickly followed by multiple releases on Cititrax, and then three LPs for L.I.E.S. Records. The BEC project has seen Oliver move into a focused, conceptual direction, that draws heavily on British synthwave, drone, noise, and the dystopian science fiction of J.G. Ballard. Each record delivers the dancefloor intentions you expect from a man with this legacy, but on top of these foundations he constructs vignettes that each study dystopian elements of British suburbia. Think early Human League, Throbbing Gristle and The Normal.

AUTUMNS is the alias of Irishman Christian Donaghey, whose arrival onto the electronic music landscape came in 2014 via Karl O’Connor’s (Regis) highly distinguished label, Downwards. He’s since released a string of records on experimental labels such as Oliver Ho’s Death & Leisure, Earwiggle, and the North East’s very own Opal Tapes. The Autumns sound is a high-energy collision of EBM, industrial, post-punk and contemporary techno. Christian’s live performances are growing in notoriety, due to his intense, punk approach and amazing onstage energy. Given our track record of bringing challenging live artists like Container and Giant Swan to Newcastle, Autumns feels like a perfect fit for our ethos.