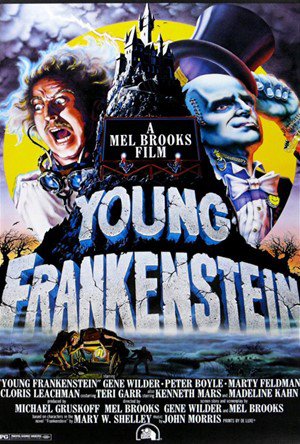 The film was chosen by our Beacon Films Volunteer, Phil Coghill, who will give a short presentation about the film of about 20 minutes before the screening.

- The film will be screened with (SDH) Captions / Subtitles so that it can be more accessible to more people.

- The film will have social distancing rules in place and mask wearing is encouraged.

- The screening aims to have a relaxed, supportive and inclusive atmosphere.

- There will be a break room nearby for anyone to use during the screening if they need it.

Image description: Vintage poster of Young Frankenstein. A dark, Transylvanian castle stands in the middle. Behind it is a large yellow moon against a dark sky. On the left is Gene Wilder as Dr. Frankenstein, he has a look of terror on his face. On the right is Frankensteins monster, wearing a suit and tipping their top hat. Near the top it says: "A Mel Brooks Film." Underneath it says "Young Frankenstein" in bold grey font that looks like grey, cracked stone.